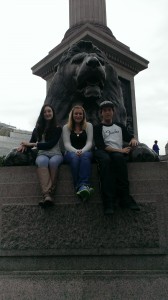 
I have been putting off writing about my London experiences (divided into four trips with three groups of people) because of their massive scale and sheer variance. Writing about London at the time of my main trip would certainly not have done it justice — posting immediately after my two-week haitus would have unfairly sidelined other aspects of the program. I must settle, then, with making it a conclusion of sorts, though there will be a bit more to follow.

Long in advance of the program we knew we were going to London. We knew when we were going to do it, because a four-day weekend was built into the schedule specifically for such an outing. We knew roughly what we wanted to do because we all had fairly similar interests and were familiar with the major tourist attractions. The question was how to get there, and with whom to travel.

We ended up deciding to go to plays on the Friday of the weekend and spending a night at a London hostel. Therefore we fragmented based on which plays we were seeing and which hostels we were using, so I travelled with three other students in the “Julius Caesar” group.

The Rosetta Stone hits you right away as you walk into the Egypt Room.

Our first day in London we immediately hit the British Museum in order to see the wealth of the Empire. (Note: spending only three hours of one day in the Museum is a horrible way to do it, and not recommended.) For two of the girls in our group, it was a particularly special occasion, as they had never been to a full-blown museum before. So while we were rushed, it was immensely an immensely enjoyable and awe-inspiring experience.

In the afternoon, we took the Underground to Trafalgar Square and proceeded to walk what felt like all around London. (First to the Eye, then along the Queen’s Walk, then back to Big Ben, etc.) We weren’t in any particular hurry, because we knew we’d immediately be back. Thursday was important, though, because it allowed us to get our bearings. Come Friday, the main museum/attraction day, we’d know where monuments were and how to get to them on Public Transit. The day passed quickly and ended without a hitch as we returned to our coach station via Buckingham Palace and caught a late-evening ride to Oxford.

Newton’s bust at the Queen’s Gallery.

Less than twelve hours later, we were back. We arrived at Buckingham Palace at opening time, allowing us to view the near-empty halls of the Queen’s Gallery in relative piece and quiet. Soon afterwards, we proceeded to walk through St. James’ Park to the Winston Churchill War Rooms, a system of underground bunkers created for commanding British troops during the War and now converted to a cramped but thoroughly entertaining museum. (The War Rooms were the surprise favorite attraction of the day.)

Next came the Household Cavalry museum, an opportunistic sidetrip due to its location. While brief, the visit was interesting due to its behind-the-curtains depiction of the Cavalry as both a ceremonial and combat unit. From there, it was an easy walk to Westminster Abbey, where we not only saw the burial places of royalty but also Poets Corner monuments dedicated to the authors in our program.

A pleasant stroll along the Queen’s Walk moved us to a different end of town and got us into line at Shakespeare’s Globe, where we had five-pound standing-room seats to see Julius Caesar. (We were entertained in line by a pop-culture saavy puppet show depicting the life and exploits of Caesar.) After fighting our way to the front row, the night went off without any hitch aside froma few leg cramps from standing for so long. I perhaps did not enjoy all the scenes of well-dressed muscular men fighting and racing each other quite as much as my companions, but then, I was probably not the target audience. 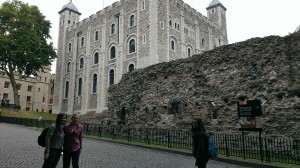 Racing to the Crown Jewels.

We crashed in a hostel that was essentially a nightclub with beds and woke up ready to hit London for the final day. We made haste to the Tower of London by way of the fire Monument and met up with other program members very near the front of the line. At opening time, we rushed to the Crown Jewels and had a few minutes essentially alone with the priceless jems. Seeing the Jewels was a concerning prospect to me, because I feared it would be overloaded with tourists on the level of the National Archives in Washington D.C. Fortunately, our early arrival negated that prospect, and thus I was able to enjoy an actually peaceful and profound moment where I was the only person in the room with the Imperial State Crown.

Our group started to split up at this point, as there was simply too much to see in the time we had left to cover everybody’s interests. I next went to the White Tower, the self-declared oldest visitor attraction in the world, where armor and arms from countless generations of British royalty has been on disply for centuries. A particularly interesting exhibit allowed visitors to lift medieval weapons. I was surprised to find that they were lighter and smaller than expected, which makes sense considering the average modern human is healthier and taller than their medieval counterpart.

The top box at Emirates.

I then journeyed a ways north for a rapid change of pace. Unable to see a professional football game in England (a goal of mine) due to seasonal issues, I settled for a tour of Emirates Stadium, home of the famed Arsenal Football Club. (My utter lack of Arsenal knowledge proved irrelevant, as a helpful fan from New Jersey gave me the quick summary of the team’s history.) The graceful beauty and size of the stadium was astounding, especially to someone who has been raised on bench-seat high school and college stadiums. 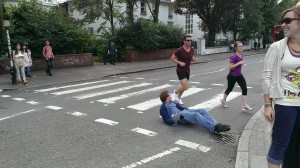 Taking a picture at Abbey Road is dangerous work.

With the shadows growing longer, I satisfied my last bit of nerd cravings with the required trip to the Abbey Road studio and a photo-op on the famous crosswalk. The actual place is underwhelming in real life, as frequent traffic and a continual throng of tourists make actually snapping a photograph pretty difficult. More interesting was a quiet stroll through Paul McCartney’s nearby neighborhood, of which I have omitted pictures to respect his privacy.

Finally, I wrapped up the day in a less-touristy immersion in British culture by joining a friend to watch a World Cup match at a pub. After the bustle of the day, relaxing with familiar faces in one of London’s countless nighttime venues proved to be exactly the closure I needed. From there, a tube ride and a midnight coach were all I needed to get back to Oxford as the last member of my program to return from London.

Not much of the stuff we did in London had anything to do with British fantasy, but it was a learning experience nonetheless. Seeing images of the capital city in movies or postcards show what the monuments look like, but utterly fail to represent the city as a modern, living entity. Walking all around town and especially taking the Underground exposed us to the actual people of the city — British citizens blind to the tourists who call the place home. Seeing all the attractions in person was interesting, but more interesting was viewing them in the context of ordinary British lives. Experiencing the city as a whole proved much more meaningful than merely visiting a few famous locations.

I ended up returning to London several times, but no excursion made as much impression on me as those first three days there. The days were so busy, and so conducive to making new friendships in the program, that they will likely remain some of my most cherished memories of the trip.