It’s been over a year since I returned from England — for that matter, it’s been more than a year since I last posted about it — but there has still always been that one last post to write. I delayed for several reasons, including schoolwork, my focus on sports blogging, and my uncertainty about how to illuminate an overarching theme of the trip, until every time I thought about writing a conclusion it seemed too troublesome to pull off and completely trivial to delay another week.

Now, though, I have to come to terms with the reality of how long it’s been since I last discussed the trip and how long the story has spent without an ending. So I thought I would do in this post what I’ve done best in the whole blog — simply describe the remaining events of Oxford as they happened, and post a few photos. Perhaps that’s what this adventure needs for a denouement: not an ending at all, but a final exhaustion of stories to tell.

Needless to say, the conclusion of the four-week Study Abroad program was a rather emotional affair. After a day of punting, chronicled previously, we also had a relaxing picnic/yearbook signing extravaganza at the Christ Church Meadows. That weekend also played host to our more formal end-of-year feast, perhaps the last complete gathering of the group.

But the adventures were not over yet. Throughout the trip I was always looking for something to do afterward — my flight was scheduled over a week after the end date — and finally in the last weekend plans materialized. Three friends from the program who had a multi-day layover until their flight would bus with me to spend a night in Paris (it was too late and too expensive to fulfill my childhood dream of riding the Eurostar, which remains for another trip) and join me in a final day-and-a-half of sightseeing before going our separate ways. (After they left for the airport I would meet with my mother, who flew in separately, for what would become one of our great family vacations, but those adventures were too expansive for the scope of this post.)

So fast-forward a stressful and sleep-deprived 24 hours and there we were in Paris, selfiing triumphantly in front of the Arc de Triomphe, waiting for the last member of our party to arrive (we couldn’t find enough spaces on the same bus), and wondering what all the crowds were for. 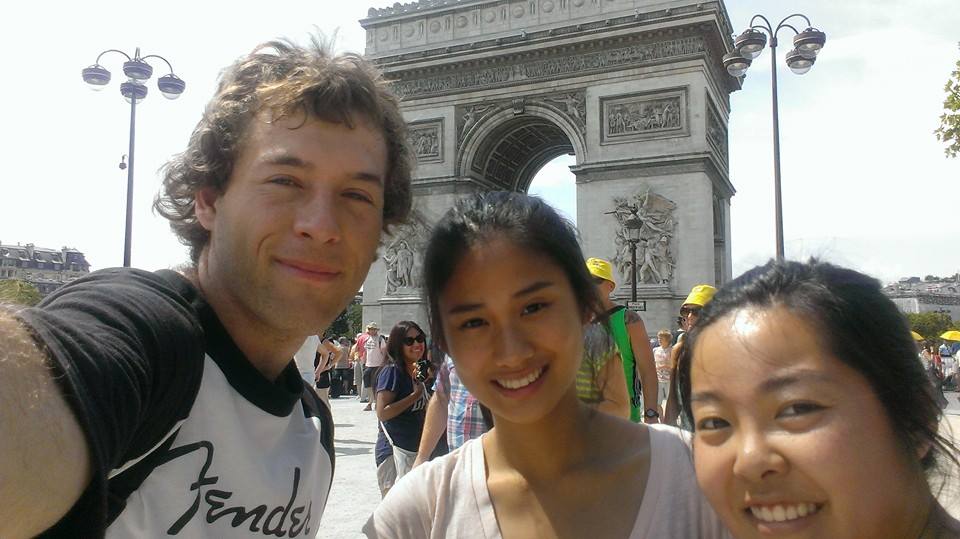 The crowds revealed to us an extraordinary piece of lucky timing: we were in the right place and just a few hours away from seeing one of the greatest athletic events in the world, the final sprints of the Tour de France. Slightly less interested, the girls left me to wait around for it (though not before we made a brief stop at a certain famous cathedral), giving me time to chat with nearby English and Dutch families and jostle my way to a workable vantage point. What resulted was a few seconds of video which a year earlier I could never have imagined myself capturing:

The next morning, fueled by the knowledge that it was our final day abroad together (an idea much less nostalgic than one would expect due to the stress of travel and constant company), we embarked on a final adventure to complete one last goal: crepes in front of the Eiffel Tower. We did accomplish this, but it took a while, given our urge to stop for frequent epic selfies.

That afternoon, we split up — the others to shop, me to check out some World War II damage — in what would be more or less our final parting of ways and therefore the end of any remaining claim that I was still part of the Study Abroad group. It wasn’t a hard goodbye; the Paris trip was not a logistical success due in part to its last minute nature but also to the fact that my travel companions and I were bound more by overlapping goals and free time than any particular team chemistry. That being said, I’m not sure I would have planned those days after the program differently — how many courses have you had where you and your classmates suddenly decide to celebrate the end of finals in Paris?

Once I got back to the States, everything was remarkably normal. There was no serious cultural readjustment to make, perhaps due to the country-hopping at the very end of my stay. (Though to this day I still have to take a second to figure out which way I should look when crossing the street.) We had a reunion a few weeks into the start of the quarter, which was a brief but pleasant affair in which I sometimes was at loss to say anything due to the fact that our main uniting force, the feeling of being in an unfamiliar place, was no more. I wish I could say I made lifelong friends in the program, and that’s almost true (I had classes and clubs with some Oxford folk, and another I was able to visit while studying in Socal this past summer) but on a day-to-day basis it’s surprisingly hard to feel the effects of Oxford outside of my urge to check Arsenal scores.

That being said, I would do it again in an instant. It was collectively the most amazing experience of college, and I’m enormously thankful for the opportunity. I suppose now it would be expected of me to produce a passage about how outside I may look the same but inside I have changed, but while that’s true I cannot (for once) figure out how to phrase it. What I can say is that this blog, journalistic and topical as it may have been at times, was a joy to write. Being able to describe fantastic adventures having lived them myself rather than reading about them in a book is an incomparable experience as a blogger. Through the travels described in these pages, I, once a rural guy who had never left the country, got to see the world. And I am a better person for it.

At this time I’d like to thank my professor and program coordinator for all the work they put into the program to make it a reality. I’d also like to thank the Summer Abroad Travel Award committee and associated donors, who through their generous grants gave me the financial ability to travel to England. And finally, I’d like to thank my classmates, who supported me, adventured with me, and were patient with my need to see and document everything. Happy travels.