Sometimes we just have to face hard truths: even though UC Davis football season is in full swing, even though we just got our first win in the most spectacular fashion, even though we’re currently living in some of the most exciting times our athletics program has ever faced, most Aggie students probably won’t care what happens to our sports program in the next few months.

Why is this? It’s partly because our teams generally have a reputation of being subpar. However, most UCD students probably couldn’t recount the current win-loss record of any team, so the stigma explanation only goes so far.

I think a large part of the actual problem is due to the academics-first culture of UC Davis. A lot of students (especially those from the Bay Area, where high school athletics can be de-emphasized) seem to view the university as solely a place to study and network, with other elements of campus life considered either secondary or distracting. At first glance this outlook makes sense, as it’s hard to draw a direct correlation between how athletes do on the field and how students do in the classroom.

Unfortunately, though, the most recent US News and World Report rankings say otherwise. US News, being a bastion for determining academic prestige, may not be the best way of actually measuring academic performance, but it has weight because people give it weight. So when a precursory viewing of the site’s top-ranked public schools show that US News likes schools that also seem to do well in football, UC Davis students should take notice.

Before we go any further, I’d like to define the term sportsademics, which will here refer to the correlation between a school posessing a well-known athletics program and enjoying national academic prestige. Now a school, like MIT, can have good academics without having good sportsademics. And the best sports schools usually aren’t the very top US News schools, though Stanford, Duke, and UCLA are challenging that norm. But a surprising amount of good academic schools also have good sportsademics.

As you may know, UC Davis achieved a #9 ranking among public schools in US News this year, good for #38 out of all schools. That’s impressive from an academic perspective, but looking at who shares the top ten with us reveals a disturbing fact: UC Davis has horrible, horrible sportsademics. Take a look below:

Before continuing the analysis, let’s toss out UCSD because it doesn’t play at the highest division and doesn’t have football. UCSB should also go because it lacks football as well. (It should be noted, though, that UCSB does have some sports cred in its favor, including the statistically best basketball player in the country.)

Of the remaining eight schools on the list, UC Davis is by far the oddball. It has the smallest football stadium, indicating smallest attendance and revenue, and one of the worst records. It is one of two lower-subdivision schools, with William & Mary sporting the better record of the two. The message is clear: the way UC Davis students and fans differentiate academic and athletic performance doesn’t translate to the cultures at other top schools.

I point out UCD’s abysmal football performance not to put our school down but to show that it is in fact possible to have it all. Why? Because four other top academic schools had decent football teams last year, and one had an incredible one. Not only is it possible to have it all, but by looking at US News it is clear that we should want to, no, we deserve to have it all. For some reason there is a correlation between a strong academic reputation and a strong sports program; the fact that UC Davis has one but not the other when its sister schools do is worrying at best and disastrous at most.

The situation is actually worse than the top-10 chart indicates. Now let’s pull the top 15 US News schools that also have football programs and analyze their computerized 2013 football rankings from USA Today as well as their program bowl game records: 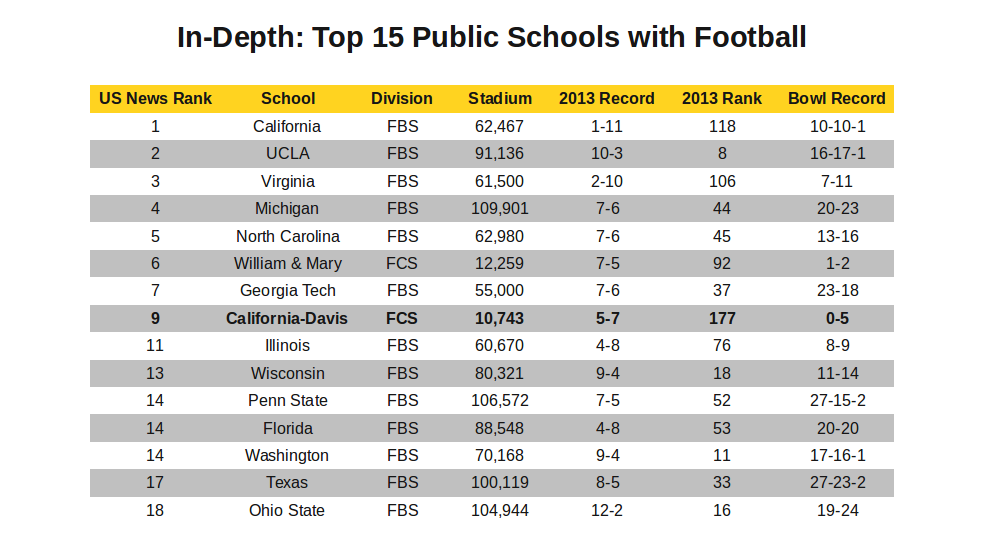 And now it’s clear how much the other top schools are leaving UC Davis in the dust. In regards to football alone (which is an important metric because it has the most potential for public recognition and profit) every other school is drawing more people, winning more bowl games, and getting higher marks in the rankings. Being FCS is no excuse, because the other FCS school did better last year than both us and several major programs on the list.

Again, these are all top-20 public schools. Rabid fans that graduate from Penn State, UCLA, or Michigan are going to have only negligibly different educations from non-sportsy Davis students.

The entertainment factor alone should be enough to make a Davis student furious over this status quo. If one thinks of athletics as a student service, like Unitrans or movies in the dorms, then UCD is woefully shortchanging its students. When UC Davis is one of the most expensive public schools in the country, it is shameful that the administration is delivering a vastly inferior product compared to those of literally every other comparable school. Regardless of whether current ineffectiveness or past mistakes are to blame, UC Davis has somehow fallen far behind other prestigious universities and is now a stumbling corner case in US News’ top tier.

So how do we fix this? The short-term step is to go to Aggie games and convince friends to go to games. The benefits are two-fold — higher attendance may convince the administration of renewed interest and care about athletics, and more happy game experiences will create a more robust alumni base that can support and encourage the programs.

Long-term, the UC Davis student body has to somehow accept the counterintuitive theory that outsiders perceive that what happens on ESPN correlates to what happens in the classroom. I’m trying to avoid nailing down a reason for this connection, because that’s murky. But when 14 out of the 15 top public schools with football boast programs that are either popular or relatively good, evidence indicates that prestige is somehow trickling between athletics and academics. And when it’s quantifiable that UCD has a perpetually worse football program than those 14 universities, one must question whether we’re benefitting from such a trickle at all and if UCD can ever climb much higher into the ranks of academic and athletics powers like Michigan and UCLA.

The US News rankings told us what we already know: that UC Davis has great academics. It’s time to call for good sportsademics too.

Talking Points
-Five schools ranked better than us in US News’ 2015 public school rankings had better football records than us last year.
-Out of the 15 best public schools who also happen to have football, UC Davis has the smallest stadium, worst bowl game record, and worst 2013 football ranking.
-Evidence from the US News rankings indicate a correlation between football power and prestige.
-If this is true, then UC Davis must somehow catch up to the athletic prowess of its academic competitors if it is to gain much more national prestige.