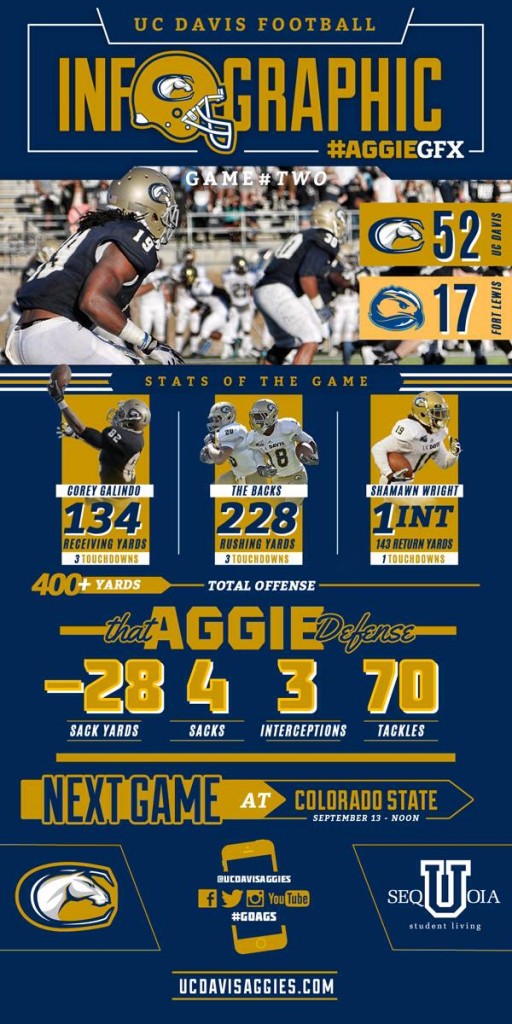 In case you haven’t heard, the Ags had a complete turnaround this week and demolished visiting Fort Lewis College from Colorado. Despite a late comeback on the Skyhawks’ part, the Ags put up even more points against them than Stanford did against us and now enter the gritty part of the schedule with an even 1-1 record.

However, just like Stanford couldn’t judge their own performance last week based on playing us (they just lost to USC), we can only get so much info by playing a Division II team. Despite the fact that we looked strong, much of the win had to do with a size, speed, and money advantage, so everything that happened on Saturday must be taken with a grain of salt.

Still, here are some highlights:

Galindo Steps Up
Wide receiver TJ King and running back Gabe Manzanares, both potential reception leaders for the Ags, were injured going into today’s game. Fortunately, veteran receiver Corey Galindo stepped up and had a terrrific night with three touchdowns (including a spectacular one-handed catch). Galindo may not hold on to the spotlight when his comrades return, but it is clear that we have yet another weapon in an offensive arsenal that needed to grow.

Running Without Manzanares
Until Saturday, head coach Ron Gould had never won a game without star Gabe Manzanares rushing for more than 100 yards. (Last season’s turnaround directly coincided with Manzanares’ breakout game.) This game, Gould used a committee of backs, including former top rusher Colton Silveria, newbies Justin Williams and Corey Collins, and wide receiver Jermale Jefferson. Silveria and Jefferson lit up the night with three 40-plus yard rushing touchdowns, which is unusual even for our ground-oriented offense.

It is important to note, however, Gould’s system is still largely dependent on the ground game. He still has a) not won a game where we haven’t gained 100 yards on the ground, and b) not won a game without some back gaining more than 100 yards individually. (This time it was Jefferson rather than Manzanares.) This is not a wholly bad thing, but it does give other teams a road map to stopping us. And while Jefferson did have a breakout game, he may still not compete with Manzanares, and, like Galindo, become another go-to weapon in UCD’s arsenal.

Kicks Up in the Air
Brady Stuart is arguably the top returning kicker in the Big Sky Conference, but had several misses last night. Attentitive Aggie fans may remember that he had some misses early last season as well, so this may just be a small case of nerves before he returns to his usual self. Having a rock-solid kicker can produce a win in close games, so this is something to keep an eye on even if it hasn’t made a difference yet.

Two Quarterbacks
Gould chose London Lacy as the Stanford starter at game-time. Lacy started this game as well (performing quite a bit better than he did at Stanford), but sat out the second half to give the other potential quarterback, Ben Scott, time to handle the ball. Since they both performed decently we can assume Gould will stay with Lacy, but Scott’s completion rate was good enough to be assured that we have a solid backup in case Lacy has to deal with an injury in the season.

On an interesting note of trivia, both quarterbacks threw their first touchdown passes in college this game, a rare and special occasion indeed. Also, Galindo now has the distinction of having caught touchdown passes from two different signal-callers.

Next Week
It’s nice to celebrate the first victory of the season, but things don’t look wholly positive yet. Our next game is against Colorado State, where we’ll return to having a size and speed disadvantage. This one may be a bit closer than Stanford due to the chance of having our injured players return. If the Ags expect to win, they’ll have to perform with at least the same confidence, speed, precision, and luck that we saw this week.

Talking Points
-We crushed a lower division team 52-17
-The game gave us time to explore other offensive options while some of our skill players are injured.
-Receivers Corey Galindo and Jermale Jefferson in particular had big nights with five touchdowns between them.