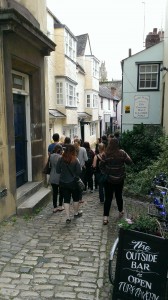 As Week 2 opens, the Summer Abroad session is now in full swing and each day is punctuated by either an intense class section, a tour, or some new group bonding activity. Soon after this blog last left off, the UC Davis students were treated to a guided literary tour of Oxford that covered Exeter College (Phillip Pullman’s college and the unsubtle inspiration for Jordan College in his books), the former neighborhood of J.R.R. Tolkien, the Radcliffe Camera, and the corridors and dining hall of Christ Church College (which look very familiar to fans of the first Harry Potter film).

The Christ Church tour was an adventure all in itself, as we had the opportunity to remain and explore the college afterward. Other attractions aside from the “Great Hall” were a centuries-old chapel (which also doubles as Oxford’s cathedral) and a normally-breathtaking quad that was humourously punctuated by temporary construction buildings painted up to look like stonework.

After Christ Church, the day wasn’t over yet; American students from UC Davis and Florida Tech gathered in our College’s bar to watch the US national football team take on Belgium in the World Cup. Though the match was disappointing, the viewing party was a nice bonding experience for the two schools.

The next non-class day of Week 1 was a bit unusual, as the session was considered a freeform museum day for individual study. Trying to stay true to my science background, I chose to split the day between the Museum of Natural History and the History of Science Museum, saving the Ashmolean for another time. The Natural History Museum is famous for keeping the best-preserved dodo bird remnants, though more interesting to me was the display of Megalasaurus (the first dinosaur discovered and identified) and the history behind the Great Debate on Darwin’s theories, which took place in the museum when it was opening.

The Oxford History of Science Museum, perhaps overlooked compared to other attractions at the University, is a fascinating tribute to some of the great discoveries and inventions from both Oxford and other centers of learning. In addition to well-preserved examples of biology and astronomy equitment, the museum hosts some nerdy treasures including T.E. Lawrence’s camera, original penicillin samples, and a preserved chalboard from an Einstein lecture. Despite its small size, the Museum was an early highlight of my week and more than anything hit home the rich academic legacy of the university.

Next on the agenda (after a relaxing dinner cruise on the Isis) was a three-day weekend. Much of the group chose to use this time to conduct what is fast becoming a program tradition — a three-mile walk through Oxfordshire to the graves of J.R.R. Tolkien, his wife, and son. (Naturally, this had to occur on the hottest day of our stay.) After visiting Tolkien’s final resting place, we stopped to eat at one of his favorite haunts — the Eagle and Child, where the Inklings writers group used to meet. 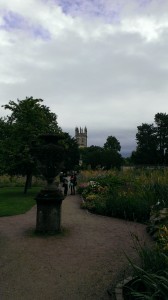 The very next day was Alice’s Day, a local holiday celebrating the writing of Alice in Wonderland by Charles Lewis Dodgson, who lived in Nineteenth-Century Oxford along with the real-life Alice. We used this day to visit the Botanic Gardens, home of the actual pine that inspired Treebeard in The Two Towers, a bench mentioned in The Amber Spyglass, and boat docks that frequently appear in the Inspector Lewis mystery series. The usual tranquility of the gardens gave way to festivity as a live brass band began performing in a greenhouse.

The weekend came to a close with more excitement, as the UC Davis students took on Florida Tech’s program in a match of Aunt Sally, a pub game in which players attempt to knock a block off a stand by chucking a fat wooden stick at it. Our professor cheerfully informed us that UCD teams usually get crushed; it came as a pleasant surprise, then, that we tied after three rounds even with Florida drawing on local talent.

If a reader of this post is hoping in the conclusion for an astute insight into British university life, or new cultural observations drawn from tourist experiences, then they might unfortunately find this post rather thin on content. The last few days have been a matter of checking off a laundry list of must-sees in Oxford. It has been a fascinating, rewarding, and in some cases tiring experience, but has not been extremely different from the first few days other than featuring more frequent and more distant events. This may change in the near future, as the winds of curiosity will soon take us beyond the borders of Oxford and present us a new view of the wider world of England. 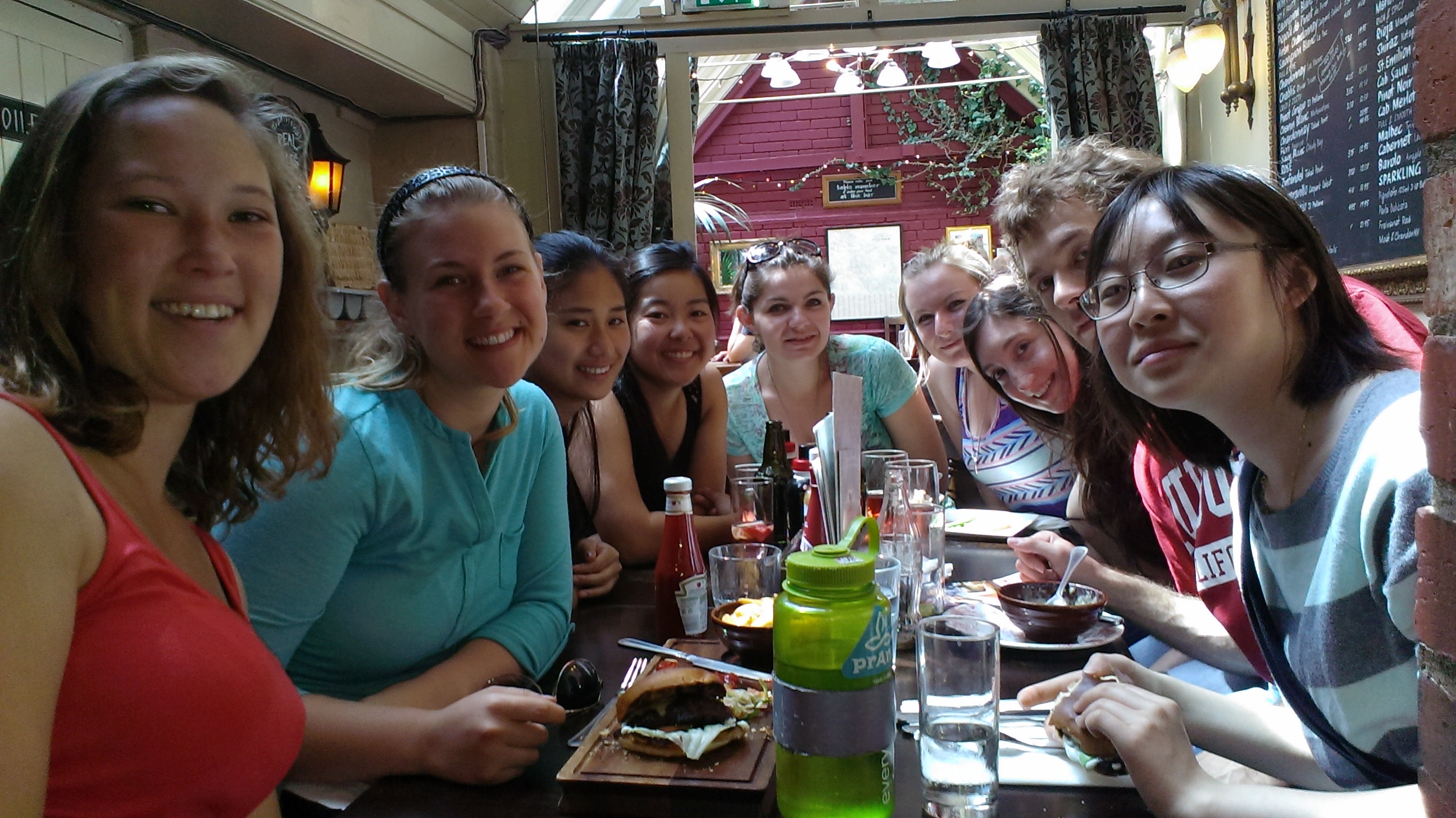 The group at the Eagle and Child.