Warning: There are pictures of video-game violence in this post. Not be suitable for young children.

As many tech-savy people are aware, last week EA tried to improve its reputation by participating in an enormous charity event — giving 8 games away for practically nothing with all proceeds going to charity. Virtually every gamer that isn’t boycotting EA probably has all of those games in his/her library by now. All 8 gory, bloody, reprehensible games.

I think I’m in a unique position to criticize such games. Why?

Because I love them. 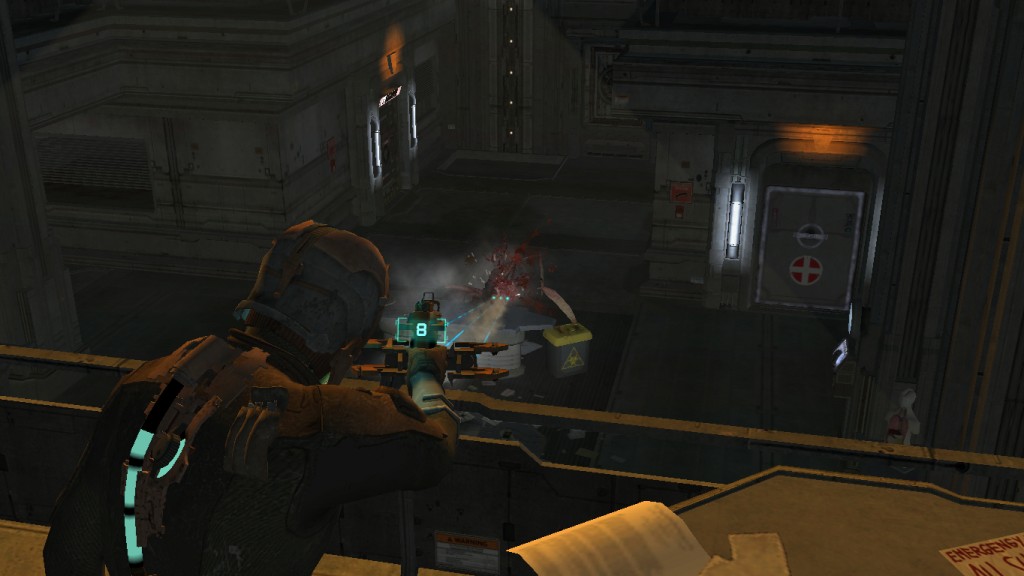 But not unconditionally. I love them the way a fan of mythology might have a favorite Greek hero: has somebody like Heracles who does incredible feats one chapter then needlessly murders an acquaintance the next. The reader appreciates the hero, but has to acknowledge his flaws — in other words, to show appreciation with maturity and reservation. Such is my attitude towards action games.

At its best, an action game (specifically a first-person shooter) provides an unparalleled level of storytelling immersion. Characters address the gamer directly. Everything occurs in a way distorted by human perspective. Decisions affect future outcomes and cause the environment to react as if the gamer were truly inside the story. Gunfights themselves are monumental tests of reflex, mental endurance, and tactical planning. The moment when the player wins a battle is an instant of pride, adrenaline, and relief rolled into one.

Rather than leave the gamer to his/her own quiet satisfaction, developers seem intent to make the moment of victory as prolonged as possible. Showers of blood erupt from the victim. The player is allowed to use a ridiculously overpowered weapon that tears enemies apart. Or, simply, in the more “realistic” war games, the death of an enemy terrorist or militant is multiplied such that the body count of each battle increases until one apparent supersoldier is leaving a trail of 128 victims in his path. Very realistic.

An anti-violence purist would argue that the manner of depiction is irrelevant, that violence is still violence. I sympathize somewhat and agree that regardless of the gory details, games should be played by people mature enough to differentiate the content from reality. Along with that, though, we need to acknowledge that level of detail does matter. It is the difference between acknowledging death and reveling in it.

Take the third-person Dead Space series, two games in which are awaiting me in my shiny new Humble Origin Bundle. It’s an extremely well-received franchise, and I’m excited to try my hand in the shoes of Isaac once I find time in my studies to do a real playthrough. There’s an elephant in the room, though, that I won’t be able to ignore: the game’s glorification of gruesome deaths and mutilation. The central tenant of Dead Space series gameplay is “strategic dismemberment,” a mechanic that forces the player to hack, slice, and destroy various body parts of demonic enemies in order to kill them. Extensive viewing of gameplay videos from the original Dead Space reveals blood spurting everywhere as the player furiously dismembers squirming beasts that refuse to die. In between these sequences are previews of innovations that truly make the game great, like zero-g warfare and the clever removal of a heads-up display. Yet the gore is what jumps out. 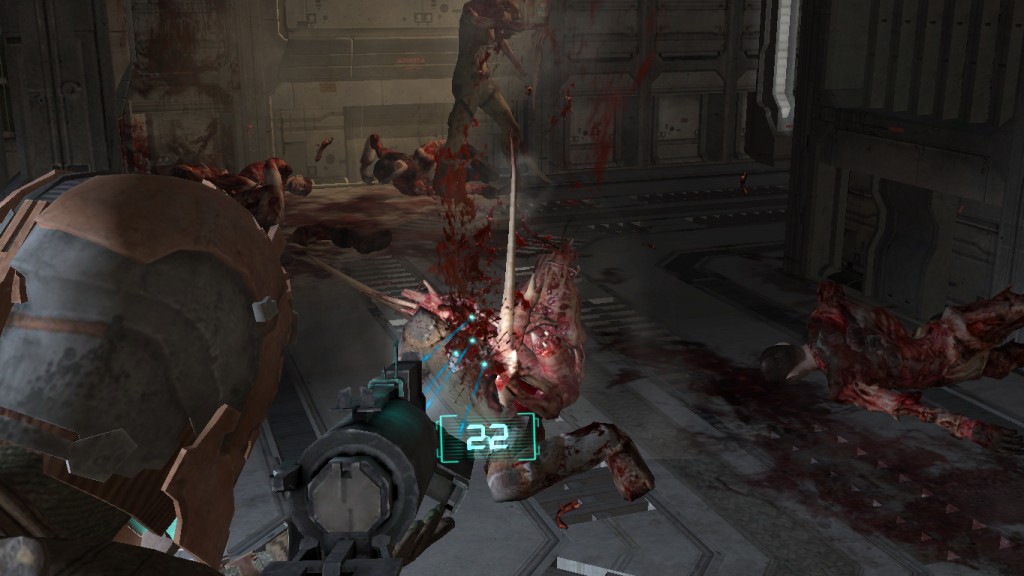 Even at minimal graphics settings, the amount of gory detail in Dead Space is disgusting.

Is all the red goo necessary, because Dead Space is a horror game? Evidence suggests not. Take the 2004 Valve game Half-Life 2, often considered the watershed PC title of the past decade. An extended nighttime sequence of the game has the player venture into an abandoned town while pursued by the undead. Killing foes does produce an average amount of (slightly cartoonish) blood. However, with very little difficulty a user can tweak configuration files that turn blood and gore off completely. The result of a no-blood playthrough: still a scary sequence. The ability to bleed or not has no impact on a headcrab zombie’s ability to jump out of nowhere and latch on to the unsuspecting protagonist. The horror and excitement comes from tricky level design, surprise attacks, and underpowered weapons — not from making enemies explode like red water balloons. (There’s an even more direct example of bloodless horror, to be discussed later).

In addition to the Half-Life series, Valve dabbles in action-horror with the multiplayer Left 4 Dead series. The game features extreme bloodshed that splatters all over the screen. Far from increasing the level of horror, the gore seems almost to detract from it, as the game turns into a grim competition to end foes in the most spectacular, unorthodox ways possible. By the time the 64th zombie squirts its blood out on screen, the game has ceased to be scary and has now become a darkly comedic ritual. (Note: when I tried to turn off the blood in Left 4 Dead 2, I failed while using the same config file commands that work for other Valve games.)

The above criticism would be unfair without examples of games that portray or imply danger well. Three first-person titles come to mind, each of which started a series and a cult following. The choices will seem odd, because only one is a legitimate action game. Yet each exemplifies the best the first-person genre has to offer, and depicts danger in a way that makes the threat of violence seem real without glorifying it overtly. The games are Portal, Slender, and Crysis.

Portal (also a Valve game) is a beloved first-person puzzle-adventure. It’s no happy romp in the park, as the guiding AI frequently threatens death and dispatches passive-aggressive turrets to kill the protagonist. Players soon learn that the action in this game is deadly: turrets target quickly and efficiently, and with no health bar or real weapons players die almost instantaneously if they venture from shelter. Suspense, fear, and the thrill of victory are all there, but not from splashing guts on the wall. The difficulty and danger comes from weakness and insecurity. In order to get past turrets, players rely on quick thinking, extreme reflexes, and environmental manipulation. Upon the turrets’ demises, other developers would animate an explosion, or a splash of cyborg jelly. Valve gives us a comedic robotic wail, some stray shots, and spoken goodbye. The shaky sigh of relief from the player is closure enough.

The minimalist survival game Slender takes the feeling of helpless danger to a greater extreme. No violence at all awaits the player; what happens plot-wise after losing or winning is unknown. Armed with nothing but a flashlight, the player must avoid an unkillable enemy (and will themselves fail 90% of the time). The true horror of the game comes from ambiance and lack of any defense other than running. Slender is extremely first-person; its perspective is so limited that the player hardly knows what’s happening a few meters away in the game world. It’s a masterpiece of fear, intimidation, urgency, and exploitation — all performed without a shot fired.

Finally comes the original Crysis, my pick for the greatest single-player shooter of the decade. Unlike the other two case studies, the body count here is quite high. (My super-soldier criticism of unrealistic odds is irrelevant because the protagonist actually is a super-soldier.) However, Crysis frames its own violence very carefully. To start with, blood, on my copy at least, is disabled in the game by default. Indeed, most deaths occur relatively minimally. Computer characters fall down, then disappear. The most poignant and vivid deaths occur in cutscenes, when the protagonist witnesses his squad mates get swept up by powerful hostiles. The scenes invoke emotion for fallen comrades rather than glorify violence.

Equally important is the moral and strategic justification for the violence of Crysis. The game makes it clear in the beginning that the player is part of a high-tech rescue mission to extract civilians. The enemy, the dictatorial country of North Korea, is clearly the aggressor in the story. Protagonist Nomad and his crew seek to go in and get out as soon as possible, until mission complications make a quick escape impossible. Nomad gets separated and is forced to fend for himself. When the player must deal with enemies, he/she almost always has the option of stealth. Going in with superhuman Armor Mode enabled seems tempting, but in this game mindless violence has consequences. Spooked enemies sound the alarm and reinforcements outnumber the player to the extreme. In order to win a confrontation, players must be smart, prudent, and lucky. Sometimes, they simply need to know when to retreat. In Crysis, satisfaction doesn’t come directly from making a kill (nor should it in most games, except perhaps in a competitive multiplayer match against a friend). It comes from beating the odds, properly using the tools at hand, and feeling like an immersed participant in a larger story.

When I start playing the games of the Humble Bundle (including Crysis 2, which somehow I haven’t touched since the public beta), there will be some that are decent. There will be some that I’ll think are great. But that won’t stop me from realizing when there’s a problem with violence. Every Greek hero story has that one section where the hero goes too far. Every sci-fi film has that one effect that looks fake. Action games, at their best, are pieces of art. But they are not immune to criticism when they descend into pulp violence.