Like a lot of gamers, I spent a good number of hours today waiting in line at BestBuy for a chance to spend two minutes with the new Super Smash Bros, which is scheduled for worldwide release during the holidays. Two minutes is not a lot of time to develop an in-depth analysis, but experiences from my limited playing time plus released information suggest a disturbing trend that must be addressed. Smash Bros 4 may eliminate some of the issues of Brawl, and may provide a more fun and level casual environment than Melee, but delivers these changes with a cost — the severe weakening of intermediate underdogs. 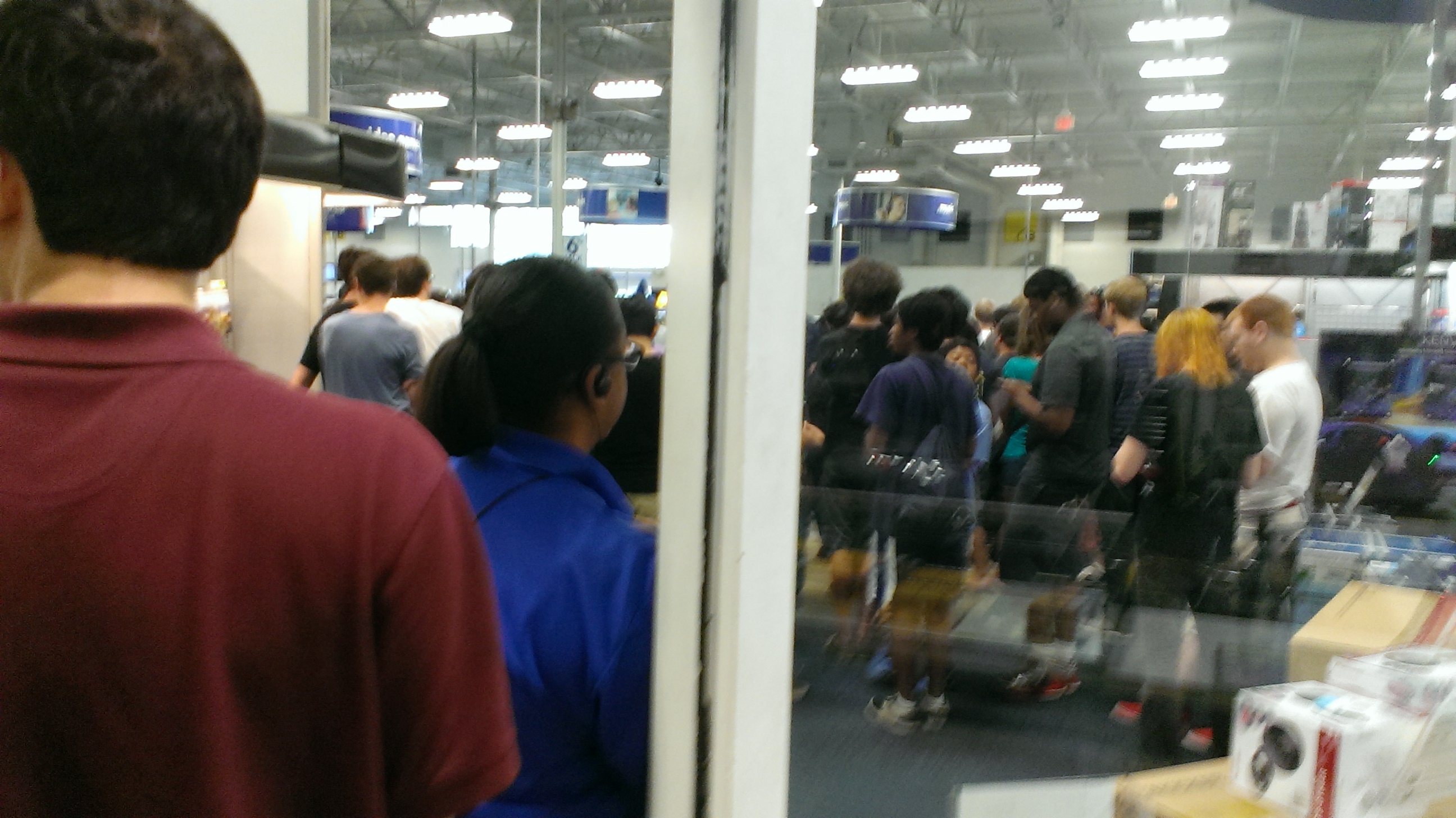 Waiting in line for just two minutes of Smash is an intense experience indeed.

For the purposes of this discussion, “intermediate players” will refer to Smash enthusiasts who are familiar with the complex aspects of the game, capable of appreciating and learning advanced techniques, and who desire to continuously improve, but who lack either the ability or inclination to play professionally. This group will likely be interested in the tweaks to Smash 4 and also more likely to accept them than the tournament scene, which may very well stick to Melee and Project M.

Many of the tweaks focus on removing exploits and unusual techniques, such as wavedashing and ledgehogging, while maintaining combo abilities and balance. The intermediate players I’ve talked to are positive or ambivalent towards these changes because it creates an even playing field. An average or a good player naturally would not mind an even playing field. But, paradoxiacally, an underdog would. Intermediate Davids need those exploits for the rare, gutsy moment where they can turn the tables and stand a chance. The moment where reflexes and experience, usually the dictators of video game outcomes, fall in face of unpridictability and sheer determination.

As Malcom Gladwell eloquently describes in the context of war and basketball, underdogs don’t win by valiantly overcoming strength in a head-on battle. Instead, they triumph by playing with a new set of rules, allowing them to transform the game into a contest of different skills than before. Among certain intermediate crowds, Melee exploits are ideal for this kind of transformation, as they tend to comprise repeatable button combinations that can be learned with a bit of reading and an evening of focused practice. Intermediate players are capable of learning such skills but do not necessarily use them, either because they don’t want to put in the required repetition or feel it would create the wrong environment for a friendly match.

This is the exact situation Gladwell describes. A weaker Smash player may not have the inhibitions of an experienced veteran. To somebody who has inferior spacing, weaker knowledge of movesets, or slower movesets, even a friendly round of Smash is a competitive battle just to stay on the stage. An underdog has much less to lose than a winning veteran by introducing competitive elements that change the vibe of a match. Because of such clashes of interests and motivations, advanced techniques can work for Davids rather than against them, as tools of upsets rather than means of supression.

The true beauty of wavedashing, dash-dancing, L-cancelling, and the likes is that they don’t guarantee victory and certainly can’t be used all the time. If an experienced player sees a technique used against them enough, they will devise a counter, or simply learn the tactic themselves. An exploit would be most useful in a very specific and likely surprising situation, which would create an exciting and fun highlight reel, thereby preserving the fun aspect of the game. A wavedash into a ledge hog at one stock, or a tech that allows a millisecond-accelerated recovery, for example, could make all the difference in an upset. The sheer shock value of such a play would surely be worth whatever environmental change the tactic would create.

Which brings the discussion back to Smash 4. Even though Nintendo claims they sped the game up from Brawl, they have been unrelenting in removing every known major exploit from Melee. A determined but less powerful player would appear to have very few creative options available except to engage an opponent in a head-on battle of game knowledge, raw reflexes, and character strength. Nintendo insists on creating a level playing field for all players, but is backing less naturally skillful players into a corner by removing every trick discovered in Melee. Smash 4 looks much the same as college football would look if the NCAA banned trick plays after watching the 2007 Fiesta Bowl.

It is possible that there are an entirely new set of Smash Bros physics exploits just waiting to be discovered. Unfortunately, based on Nintendo’s existing stance and my own observations of the game, this seems unlikely. Which means Nintendo has missed the point on what made Brawl problematic. Even if game speed, character balance, and tripping are modified or remedies, Smash 4 will still retain the fatal flaw of Brawl — predictability. A game where the most skilled player or overpowered character always wins if nobody makes a mistake is fair, certainly, but just not very exciting. Nintendo maybe understood this at one point, but addressed it in a clumsy way with the advent of random tripping. Now, however, the Smash franchise lacks any obvious impedance to mechanical, predictable victories. Such lack of player-driven unpredictability and upset potential is a death sentence to a fighting game, and is why, even in my excitement, I’m nervous about Super Smash Bros for Wii U.