A little Christmas gift I’ve been saving for myself is a non-contract Samsung Galaxy Reverb, which I picked up for $100 (normal price $200) online on Black Friday. Combined that with Virgin Mobile’s $35/month unlimited data plan, and I felt I was getting a pretty good deal. (Though I wanted to withhold judgment until I actually got to use the phone.)

I’m staying in a rural area over Winter Break, and don’t have good enough cell service for activation without driving somewhere (which says something about the quality of Sprint/Virgin’s network). However, I was able to activate the phone, connect it to wifi with ease, and explore several of its features. Since this is my first time owning anything above an even remotely modern smartphone, I decided to post my first impressions as a moderately knowledgeable Android/Linux user. 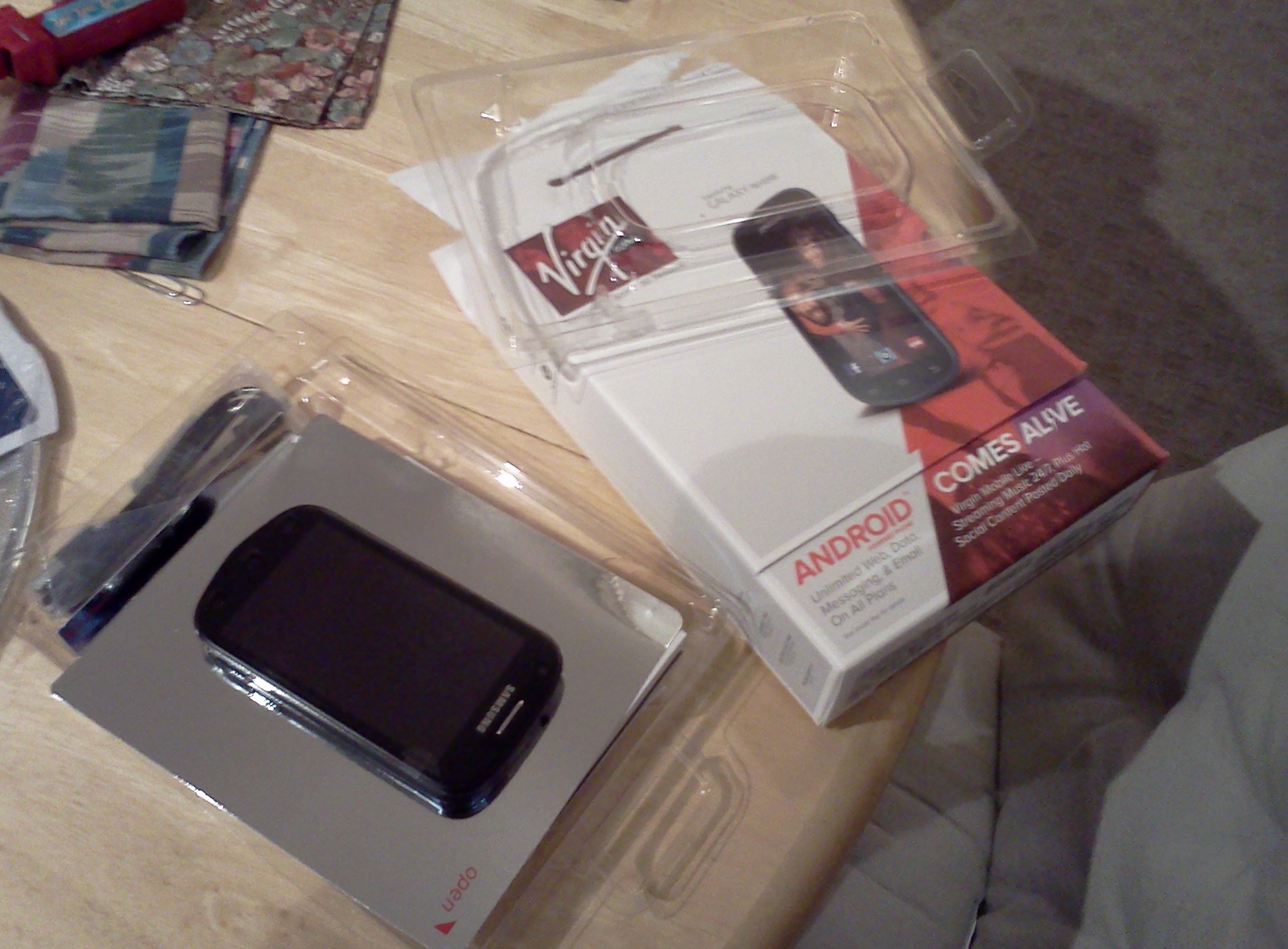 Sometimes the kitchen table is the best workbench.

The phone is technically a low-mid range phone, with a 1.4 GHz single core and 768 MB of RAM. It runs Android 4.04 ICS and offers users a choice of interface between the Touchwiz launcher and the Virgin Mobile ID system.

Compared to higher-end phones, these specs aren’t particularly special. Yet I found that the phone was light-years beyond my aging Froyo phone, and indeed more advanced than any phone I had seen before 2011. I was initially skeptical of Touchwiz (I tend to be a UI purist) but found it to be quite sleek and intuitive. The 5 MP camera and 720p camcorder seemed capable, as did much of the stock apps. At almost every turn, the phone and OS gave off an aura of slick professionalism. 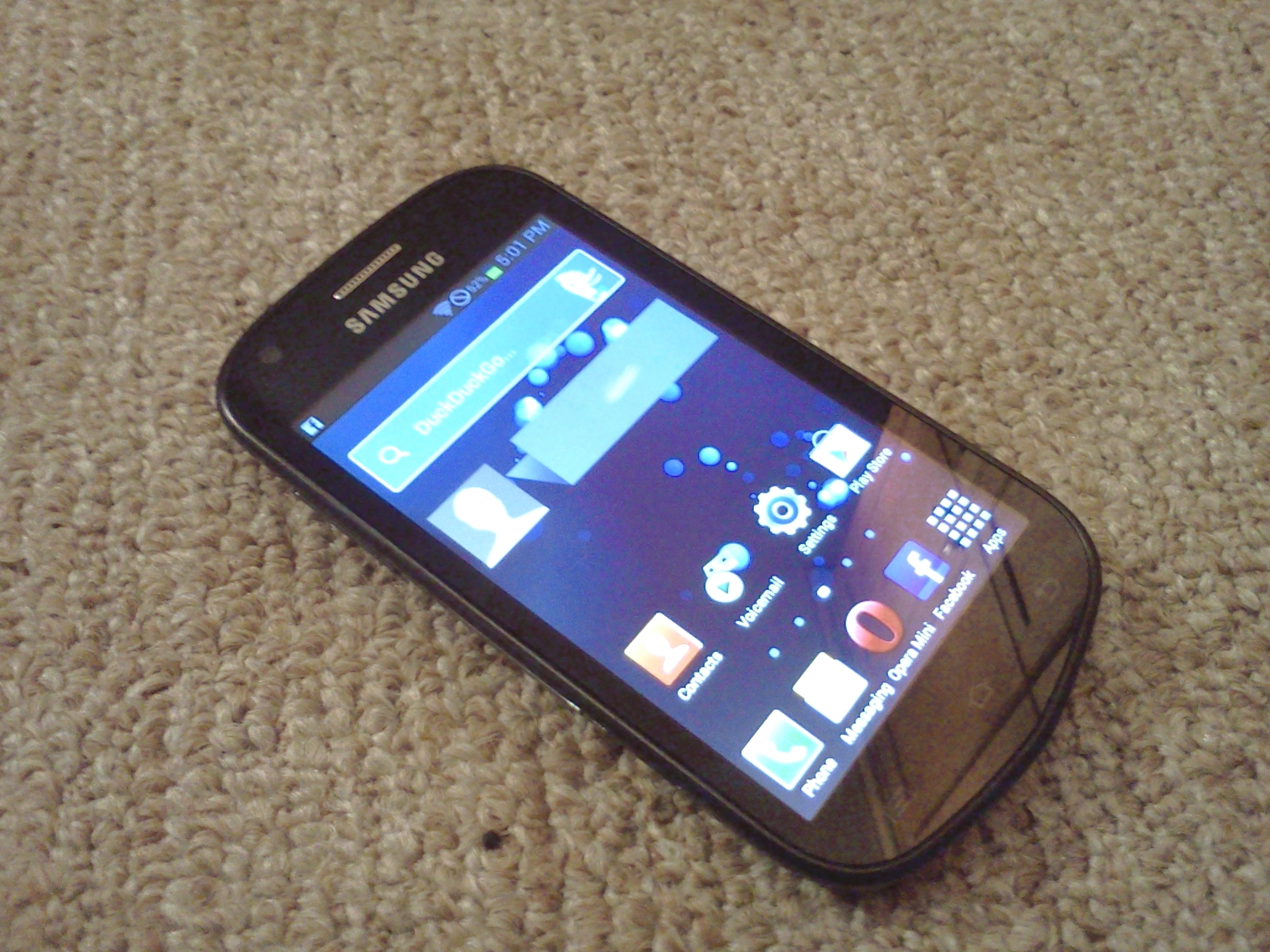 The Samsung Galaxy Reverb, with several new apps installed and the home screen rearranged. Hopefully the last photo to be taken with my old Optimus.

One area where the phone did fail, though, was in importing contacts. I decided to not upload my old phone’s contacts to Gmail for the sake of protecting my friends’ privacy from the big G (no need to thank me, guys.) So instead I tried transferring them over from the SD card.

Unfortunately, during the transfer the phone also uploaded all of my Google+ circle buddies (or whatever the kids are calling it these days) into my contacts directory, essentially cluttering my lists with dozens of numberless entries. It took about a half hour to check through my contacts for duplicates and duds and to delete/merge all of them. (The “Join Contact” feature, though, which allowed me to manually pair numbers with Google+ friends, was very useful, if a bit slow.)

If there was a setting to stop Android from pulling people from Google+ and old Gmail threads, it wasn’t very obvious. While Google is still making strides in unifying its services, this particular incident seemed just plain clunky.

Fact is, I don’t need an S III or Nexus 4 on hand to see how far Android has come. I expected to pull out of the box a middle-of-the-road phone that would be adequate for usual smartphone functions. What I got was decent hardware and an efficient, intuitive interface. To probably any user migrating from Android 2.x, any 4.x phone running on solid hardware will seem extremely slick and futuristic compared to what came before. The fact that a midrange phone was able to awe me after a few minutes of use indicates how far Google’s OS has come and what potential it has on top-of-the-line machines.

The contact-migration problem was worrisome, and indicated that there is some more work to be done. (Though for all I know, this has already been improved in Jelly Bean.) Even then, the “Join Contact” button demonstrated Google’s power in using its varied services to enhance a phone experience in a way that Apple can’t.

Android has come a long way from my first run-in with it on my 2.2 phone. Simply seeing the technological achievement of last year’s Ice Cream Sandwich excites me about the potential of Jelly Bean and future releases.